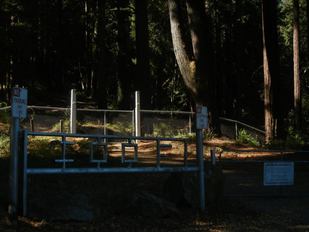 In 1790, the Spaniards colonized and named the area Santa Cruz (Holy Cross); a joint effort was underway to erect missions along the California coast for the Catholic dioceses of Spain. As a result much of the Native American indigenous population, became missionized into the innovative religion, in exchange the indigenous populous were forced to sacrifice practicing their sacred traditional ways. The consequences would prove deadly for the passive native culture, as they succumbed to violent abuse, slavery and psychological torture. Within less than 15 years, these proud peaceful people were all but extinct. Mission Santa Cruz, was known to be the most cruelest of the missions erected in California. Legend has it, that a small band of Native Americans who revolted from these captors, cursed the land and any future inhabitants as a punishment for the cruelty they endured.

The mountains of Boulder Creek once flourished with wild life; grizzly bears, eagles and streams of salmon were plentiful. Tall redwood trees which compared in size to a Jurassic park movie towered in the skies above and indigenous Native American inhabitants known as the Achista and Acsaggis tribes freely prospered in these tranquil mountainous hills. However, the peaceful tribes people, filled with hunters, gatherers, woman and children - would soon die out, an unforeseen fate amongst a spiritual people, brought forth by an invading righteous culture. It would be less then a century past, that would bring forth a new invading culture, one driven by greed and who would continue to disgrace the land after its people were long gone.

1862,  Boulder Creek became known as a logging town with clear cutting camps taking over the terrain and milling out most of its towering redwoods, throughout the area. The desecration and unearthing of the forests natural foliage after years of driving out much of its indigenous species dishonored the spirits of its ancestry  and it is believed that this vile act against nature and the suffering of the aboriginal people endured at the hands of the invading Spaniards, nearly 80 years prior,  left a curse on the mountainous region, brought forth by its former native inhabitants. A curse in which nature itself would reap havoc and take its revenge upon the people of the mountain community for generations to come, in the form of  fire,  drought, floods,  mud and landslides…

Tucked away, up upon a wooded hill side, near the original town church of Boulder Creek; where the small town’s founding fathers would have spent their Sundays in prayer, lies Boulder Creeks first and only cemetery.  For many years this cemetery took on a foreboding dark ambiance; one that would make your skin crawl, particularly if you dared to walk its lonely paths at night.

In the  1990’s many young teens decided to dabble in the dark arts in the hopes of becoming a witch and invoking the spirits, perhaps for a sense of empowerment, of course with such movies as “The Craft”, “Practical Magic” and “The Blair Witch” hitting the big screen during their era, it is of no surprise – However, someone who took a more serious interest in the dark arts, someone with a true desire to invoke and open the door to something truly evil to arise, which casted a dark and malevolent shadowy presence upon the earth; a presence not belonging to this world, one filled with hate.

A handful of elderly locals claim  a nearby Indian burial ground lies beyond the back gates of the Boulder Creek Cemetery, a gate which strictly prevents those from wandering to and from the sacred ground that lies beyond.  Much like the makings of  a Stephen King’ novel “Pet Semetery” curious passer buyers have in fact crossed its gated threshold and gone beyond. However, as disturbing as this may all sound - it’s not as disturbing as the unholy artifacts which were left on the hallowed ground of the cemetery. Often you could find objects which bore ritualistic symbols and candles oozing their wax amongst the head stones in colors of red and black.  Strange offerings would be left behind as evidence of unholy goings on.

The small cemetery established in 1862 is the final resting place of many of Boulder Creeks, founding fathers, pioneers and local residents.  Much of the cemeteries original inhabitants lay beneath the earth in shallow and  unmarked graves, many of their markers, lost, stolen, desecrated or destroyed by the elements and vandals alike.  Dozens of children, many of whom died from plague, several persons who died by the hands of another,  elderly who passed due to age or illness and numerous loggers who passed away over a century ago in tragic accidents after desecrating the sacred redwoods - many of their stories lost forever – unless by chance, uncovered in an old news paper article.

So what of the strange rituals which were left evident in years prior at this small historic place of rest for the dead, what entities are believed to have been conjured by foolish mortals dabbling in the dark arts?

In many Native American cultures it is believed the sacred burial grounds of the dead have a “spirit who watches over the remains of the departed”  The culture of the Native American people, believe when one of their own has passed on to the spirit world, they are to never again, speak their name  and all of the decedents’ personal belongings are to be burned or destroyed, so that they may have these items in the spirit world, and will have no reason to return to the realm of the living.

It is theorized that the ritualistic practices, which occurred at the cemetery two decades prior, opened a door and awoken the spirits bringing forth many of the lost pioneers who desecrated these once sacred lands. The spirits of those responsible for cutting down over two billion feet of redwood lumber, raping the land. However, with these spirits something else is believed to have been awoken.  A  spirit who hides amongst the trees, a dark malevolent mass, who’s eyes glow like fire and wisps from the tree tops, entrapping and torturing the souls of the cursed and enticing the souls of the innocent, to do more of the same.

It would not be until 2010 that this haunted cemetery and its legends would be researched and investigated. This time by ghost hunters; ghost hunters who aspired to close the door and release the spirits left trapped by the previous dark incantations of would be dark witches and the malevolent watcher spirit who entrapped and guarded these souls that it claimed for his own - it would also take another several years to pass -  before this same ghost hunter is able to find the help needed to set these trapped souls free.

Using simple K-2 metering devices and crude basic tape recorders, these paranormal investigators would soon find they took on more than they bargained for and true evil does exist.