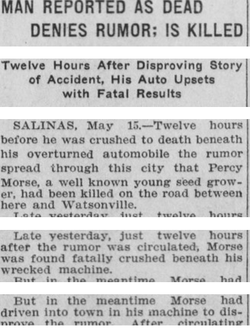 Twelve Hours After Disproving Story of Accident, His Auto Upsets with         Fatal Results

​  SALINAS, May  15- Twelve hours before he was crushed to death                 beneath his overturned automobile the rumor spread through this city       that Percy Morse, a well known young seed grower, had been killed on the road between here and Watsonville.
​
​Late yesterday, just twelve hours after the rumor was circulated, Morse was found fatally crushed beneath his wrecked machine.

​But in the meantime Morse had driven into town in his machine to disprove the rumor.

​After circulating about for some time to show his friends that he was really alive he departed alone in the car for Watsonville, and a few hours later he was found dying underneath his machine, which was overturned near the road.

​The tragic death of Morse, coupled with the strange rumor which preceded it, has caused much excitement here. 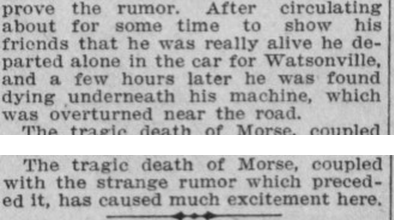