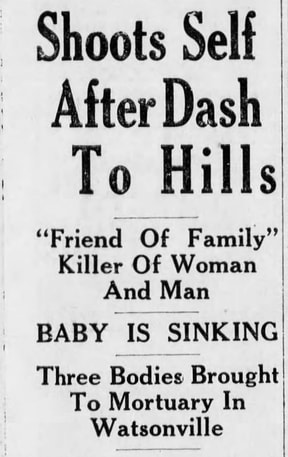 August 21, 1936 – One of the most grizzly murder suicides occurred in Watsonville that would go down in infamy.  28 year old Grace Mae Ayers, 28 year old Austin W. Martin and three year old Hazel Marie were gunned down while in their vehicle by a passing motorist. The mother of the child Grace Mae Ayers and her male companion Austin W. Martin, died on the scene – the three year old was found in critical condition with a bullet wound to her back, she was taken in for emergency care, her prognosis grim.

55 year old Jack Bennett a friend of Ms. Grace Mae Ayers, was identified as the assailant. The motive;  nothing more than the jealous rage of an older man, who imagined himself as the suitor of Ms. Ayers, and no one else.  Police described the cold blooded murder the most brutal homicide they have seen in Santa Cruz history. It is alleged that Bennett, was intentionally stalking the couple and was armed with a 30/30 rifle. While he drove by the three, who were sitting in their parked car, he repeatedly fired the gun killing the couple instantly and critically wounding the young three year old child, whose body was shielding her mother’s from the hot projectile.

Bennett, sped off and a man hunt ensued, however, his vehicle was nowhere to be found. It would be later revealed that Baker headed up Hecker Pass and into a wooded park area of Mt. Madonna. There he hid in his 1927 Chrysler Sedan, likely contemplating what he had done. The following day he was found dead in his car, he had placed the 30/30 rifle under his chin and proceeded to pull the trigger, death was instantaneous.

The coward’s body was discovered by a local ranger who recognized Bennett's vehicle and his remains were removed to the coroner’s office.
​
Miraculously, young three year old Hazel Marie, did not give up her fight for life and made a full recovery. This incident went down on record as one of the most cold blooded acts in Santa Cruz County History of its decade. ​