Thought He Had Discovered a Secret Whereby to Cheat Nature

Dies of Starvation in a Cabin Whose Larder Was Always Empty

Special Dispatch to The Call.

​SANTA CRUZ, Jan  - Because he thought he could cheat nature and live without eating, Frank Bernstein, who lived on a small ranch at Calabasas, is dead. His body was discovered by a neighbor named Earle, who entered Bernstein's cabin this morning. The indications were that Bernstein had been dead for several days.

​All things being considered the conclusion is unavoidable that his death was due to starvation. He was always considered a very eccentric creature, and acted strangely. Of late he had been an ardent student of the mysteries of theosophy, and had spent much of his time in the study of this philosophy. He believed he had solved the problem of existing without food, which belief had come from the study of the doctrines he had spent so much of his time in unraveling. His cabin was destitute of food.

​Bernstein came to Calabasas in 1884 and purchased a ranch of fifteen acres, which he never cultivated. At one time he was presented with a large number of fruit trees by a neighbor. He planted them, but only to uproot them, as he thought he could exist without  the necessaries of life. He was considered insane by many of his neighbors,  and was a few years ago brought to Santa Cruz and examined by a board of examiners for the insane, but it did not think the case one that would warrant the sending of the man to a State Insane Asylum He returned to his farm, but only to again act in the same peculiar manner.

Although the possessor of land he let the property go to waste and refused to cultivate it. He earned his livelihood by working for the neighbors, who in this section of the county, are all farmers. Bernstein was a native of Sweden and came from a fine family. His body is in charge of  the Coroner, and inquest will be held 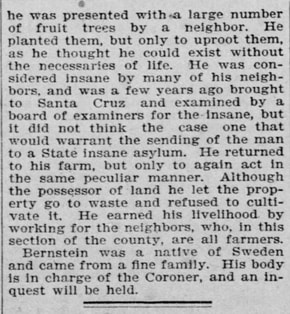