One of the most historic buildings in down town Felton is known as the Cremer House. Built in1874, the establishment was once known as the Creamer Hotel. During its heyday the Creamer Hotel was run as a restaurant, saloon, and boarding house, owned and operated by Thomas Cremer and his wife, Margaret.  Currently called The Cremer House, this piece of Santa Cruz Mountainous history owned by Bob Locatelli and Emily Thomas, serves as a restaurant and ale house.

Between 1915 to the early 1920’s, according to historian Randall Brown, the Creamer Hotel, was the informal focal point for Hollywood western movie corporations. Famed actor and producer of his era, William S. Hart, is said to have frequently stayed at the hotel, while filming several of his silent films, some scenes are said to have been filmed at The Creamer Hotel.
During the prohibition era, secondary owners of the Creamer Hotel purchased the Grand Central Hotel across the street. The owner’s stopped running the Creamer Hotel as a boarding house and leased the building to the Western Bee Company, which housed multiple bee-hives outside the perimeter of the building. This served as a perfect front to deter the fuzz, from the hooch that was actually being smuggled within.

​The Cremer House not only harbors a rich colorful history of alleged brothels, prostitution, and booze smuggling, but murder has also left its mark on the old historic hotel.

In a news article of the Santa Cruz Sentinel, dated October 5, 1884…one man’s last day of work, turns into his last night on Earth.

Saturday morning Win Donnelly was found dead in his bed in Mrs. Creamer’s hotel at Felton. He was in the employ of Cummings & Jansey, the contractors of the Felton & Pescadero Railroad, and was discharged at eight o’clock Friday morning. He demanded on having his account with the contractors settled pay for half a day’s work, amounting to about seventy-five cents. This was refused to him and he became boisterous and annoying. To George Jansey, one of the contractors, he was particularly obnoxious, and followed around all day at Felton directing insulting epithets at him.
Late in the afternoon Jansey was in J. Ball’s saloon when Donnelly entered, and Jansey, to avoid trouble, walked out, but returned again when Donnelly left the saloon. While Jansey was seated at the stove Donnelly once more came in and walking up to the contractor he used a vulgar word and added:
“I’ll murder you on sight.”
This aggravated Jansey so – that he picked up a poker and struck Donnelly a gentle blow on the side of the head. This made the latter leave Jansey in peace, but before he left he took several drinks and walked around for some time before he returned. Jansey was arrested, pending the inquest, and released on filing a bond in the sum of two thousand dollars, with W.P Young and J.J. Cummings as sureties. Jansey is a young man and had only been at Felton for four days.
…

In another article from the Santa Cruz Sentinel, dated Aug, 26 1890 – another sinful dispute turned deadly occurred.

George Duncan, who was stabbed last Tuesday at Creamers Hotel, Felton, by Henry Jackson, a cook, died on Sunday at the county hospital.
On Sunday evening Dr. C.L.Anderson and Dr. F.E. Morgan held a post-mortem examination. It was found that death resulted from a knife wound in the left side of the abdomen, about seven inches deep, severing the intestines above the sigmoid flexure and penetrating the pelvis of the kidney.
Jackson had his preliminary examination at Felton Monday and was held to answer before the Superior Court on a charge of murder.
…

To date many come to The Creamer House, to enjoy  delicious entrees, craft ale, and to share in a history of long ago…but it would appear that history is not the only residual effect that was left to linger upon this 143 year old building.
Owner Emily Thomas, spoke with Santa Cruz Ghost Hunters and allowed for a late night paranormal investigation of the establishment. According to Thomas, employees and some patrons alike have experienced odd occurrences while at this establishment.
Descriptions have included the sounds of disembodied footsteps, to employee complaints of bottles of salt, catsup and pepper shakers flying off tables, with no explanation in sight. Unusual cold spots in certain areas of the building, unexplainable electrical outages and an overall feeling of unease after the doors are closed.
…

The Santa Cruz Ghost Hunters team was allowed to conduct a late night investigation after closing. What we thought was going to be a quiet night investigating the upstairs offices, the down stairs basement, with little activity, turned to be very active prior to ending our investigation. We soon realized as K-2 meters, the REM POD and Tri Field meters started taking on a life of their own, that the actual activity was centered in the bar area, near the kitchen itself. When asked on multiple occasions, if the entity wanted us to leave, we clearly got our answer as every meter lit up simultaneously – When asked “Are you stuck” once again our electrical meters light up simultaneously.

We surmise that there is in fact an entity that haunts the Cremer House. Could it be the spirit of George Duncan the Cremer Hotel dishwasher, who was stabbed by the cook after a brawl between the two broke out in the kitchen in 1890, is it he who still wanders the premises, or perhaps this is the spirit of Win Donnelly, the young angry railroad worker, who was discharged without pay and obnoxiously harassed his employer George Jansey in a drunken rage, until Jansey murdered him?
We may never know for certain, a secondary investigation would be necessary for further exploration; however, what we can ascertain is the Cremer House is home to more than just its history.
​ 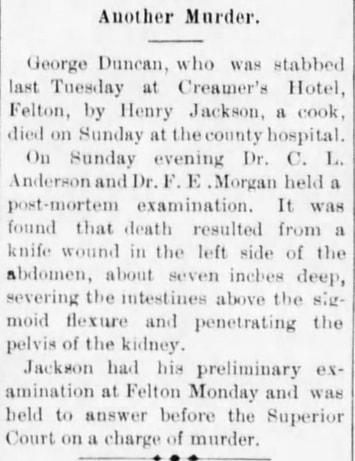