Rispin Mansion
The legend of the Rispin Mansion is one that many Santa Cruzian’s do not take lightly. From tales of a dreaded curse which prevents anyone from successfully owning its historic motif to rumors of the dead who still haunt its empty shell and wander its cavernous halls. The 92 year old mansion, which stands 4 stories tall and once housed 22 bedrooms has remained vacant for 57 years-well over half of its existence. The legendary curse begins with Henry Allen Rispin himself, a well-off San Franciscan who acquired the mansion with the intention to turn it into a resort known as “Capitola by the Sea” only to endure a series of misfortune that resulted in the death of his only son, the divorce of his wife and the final blow of complete financial ruin.

But Henry’s plight did not end there. He wandered the city streets a vagabond homeless and penniless. Even upon his death he endured the ultimate indignity when neither the love of a relative, a friend or even an empathetic former wife would claim his deceased remains. Instead, Henry Rispin was left to decay in a pauper’s grave with not even as much as a marker to say “Here lies Henry A. Rispin-Poor Bastard”. Henry’s calamity left him to decompose amongst Alcatraz's finest, nothing more than heinous serial murders and death row inmates in the empty fields of the Olivet Cemetery in Colma, California.

The story doesn’t end there. Before Henry’s string of bad luck ended so tragically, another lucky soul tempted faith. Lured by the majestic manor, millionaire Robert Smith Hays acquired the estate and all of its tempting riches. Perhaps he was not so lucky. Even before Hays could enjoy the mansion's lavishly furnished halls that he purchased at a banker's foreclosure price, his lovely wife soured at it’s grand décor if for no other reason than because she herself was not able to take credit for its copious interior design to indulge her ego amongst her high society friends. Alas, Smith too, suffered bankruptcy and by 1936 all of his holdings were liquidated. He too, lost his interests in the mansion.
For approximately 5 years the mansion remained vacant, until 1941, when the sisters of the Oblates of St. Joseph - Poor Clares, acquired it, as their new rectory. The nuns would live on the premises for approximately 15 years. During their stay many additional out buildings including  a  chapel were erected. The nuns had a place to rejoice the name of God and do the lords good work.

However, it was not long, before the sisters, grew uncomfortable with their surroundings. Interviews conducted by "Sarah Harvey" in 1990's with surviving sisters of the Oblates, claim the large monastery was too cold, on their feet, with their open toed sandals. Others, mentioned their were too many onlookers, frightening the sisters who would stare through the windows. And still another mention of something 'unholy' wandering its vestibule.  The Catholic Church abandoned the property and relocated the sisters to a new monastery closer to the ocean and away from the prying eyes of the local inhabitants. A move to a colder climate for certain. So did the sisters move out because they got cold feet? Seems it would have been more cost-effective to purchase closed toed shoes, or perhaps was it still something else?

The mansion became vacant after the Catholic Church left the property in 1956 and would continue to remain vacant and forgotten. For over 64 years. Owned by the city of Capitola, its resurrection remained uncertain.

Then, in 1998, the dreams of another wealthy potential owner, arose from the depths to rescue the mansion from its foreboding neglected state. In 1998, builder Barry Swenson and Ron Beardslee united with hopes to invest in a multi-million dollar venture to transform the Rispin Mansion into a Bed & Breakfast. The developers invested millions fighting for the rights and plans with the city for approval to resurrect the dilapidating mansion, which they won.
After battling for nearly a decade, and only days before plans were to commence for rehabilitation of the manor, a devastating and unexplainable fire broke out and gutted the mansion in 2009. Once again, the mansion's curse thwarted habitation of the living, and developers were forced to cut their losses. The mansion was ultimately mothballed by the city and boarded up. It continues to remain vacant.

On August 2012, Santa Cruz Ghost Hunters team, investigated inside the Rispin Mansion. Accompanied by city mayor Michael Termini, the S.C.G.H team and local psychic Monnica Selpulveda, they arrived for a late night investigation to try and determine if in fact the mansion is haunted.

S.C.G.H  reports:
“We arrived at the mansion before midnight, and immediately psychic / medium Monnica Selpuveda, began picking up on the energies in the mansion, she hit key points of females residing at the mansion, and she was right. I had not told her about it being a convent, nor the stories of witnesses seeing the apparition of a nun on more than one occasion."
Porter continues, “ She felt there were both good and bad energies and the mansion was more of a vortex for the other side. The spirit of the nun she felt protected the mansion, however she had stated that the nun was saddened by the current state of the mansion. She also mentioned a negative energy dwelling in the floors below. She described him as not so much an evil man, but one who is very angry; a bully and one who should not be messed with.
“During our investigation we noticed multiple cold and warm spots flowing with air that were unexplainable. Even if I were to conclude it is a back draft of some sort, the entire mansion is boarded up and I cannot account for the drastic and sudden temperature changes that were even registering on our equipment.”

“ The psychic also mentioned we may feel someone touching us or pulling our hair. I and another party did recall that happening, as if someone was walking behind us, touching our hair and tapping our shoulder.” Porter claims. I also recall the sense of an animal walking behind us, almost like a grunting sound, gave me goosebumps.
“The most disturbing part was when we tried to continue with communication. The medium told us the female entity she was seeing said  we all would be safe if we remained on the top floor.
However, as it approached towards the witching hour, one of our new investigators, who had been taunting the negative spirit’ that was believed to be down below on the bottom floor, had asked to speak with me privately. As she and I walked down the stairs forgetting of the earlier warning, I turned and witnessed the investigator falling on the staircase with such force as if someone had pushed her. She tried to catch herself on the railing and was able to do so, however she immediately asked “Who Pushed Me?” and was noticeably disoriented and shaken afterwards, as if she was spirituality attacked.

As the clock began approaching 3:00 a.m., we thought it best to not tempt fate and aggravate the energies any further and began to pack up to leave the mansion. As we prepared to leave, the lights inside the mansion kept going on and off sporadically, which was odd. Although they were set as motion detectors, they kept flickering without motion and very quickly. I would prefer to think that maybe a breaker needed to be reset, but I cannot say for sure. I can only say that it had not happened all night until after the investigator had been pushed down the stairs and we prepared to leave. When we departed, another team member noticed the back of the pants  of the investigator who had fallen, and you could see a distinct boot print on the bottom of her pant leg as if someone had kicked her.”

Previous day walks through the Rispin Mansion had occurred prior to this investigation, for research purposes. It was interesting to note, that on a Sunday afternoon the mansion felt hospitable, warm and content, almost spiritual in nature. Is the presence of the nun who is said to have often been seen wandering the upper level of the former monastery, perhaps producing this welcoming ambiance on a day that is savored by the Catholic doctrine to worship God?

Upon visiting the same location during the middle of the week, the atmosphere of the mansion (former monastery) was indeed much different – cold, uninviting, dark – foreboding...as if the dark entity was now controlling the environment and no one was welcome on his domain.

Does the monastery harbor a dark entity that is believed to dwell in the boiler room of the basement floor – Is the shadowy nun, who has been seen and frightened off many a trespasser, the guardian of the old monastery, protecting those from harm’s way – from the dark entity that lies within?

The mansion which is believed to be haunted and many also believe it to be cursed – is a structure that remains completely boarded up, chained off and indefinitely locked. Owned by the city of Capitola, county of Santa Cruz, the Rispin Mansion’ although best suited for the setting of a horror movie, will likely forever remain closed – To date (2021) the Rispin Mansion has stood for now 100 years, shuttered for most of its existence.


“My thoughts? – I think the Historical Rispin Mansion would best be served as a wax museum, filled with historical figures of Santa Cruz County, along with a local coffee  and gift shop. It could still be purposeful and educational – besides a wax museum is something this county doesn’t have, what better to do with a haunted mansion? . “ Mari Porter 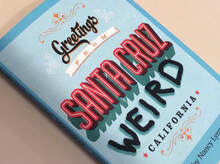 For a dark imaginative tale, of  Rispin lore, check out the book Santa Cruz Weird, by Nancy Lynn Jarvis. - Their you will find "Secrets" a short tale of horror - based on haunted tales from locals and the darker creations of author, Maryanne Porter.