SPONTANEOUS COMBUSTION
A Young Woman Burned to Ashes - After a Debauch

A few weeks since the following appeared in one of the Santa Cruz papers:

There was no other reference to the fact and the public regarded the fact as an ordinary case of death from natural causes.
Yesterday our reporter ran across a resident of Lornezo District, and from him obtained the particulars of one of the most peculiar cases of death we have ever been called upon to record.

It seems that the family consisted of Mr. Noyle and his two daughters, Lucy and Carrie, both very bright and refined young ladies, but unfortunately the latter had inhearited from her father a fatal passion for ardent spirits. Old man Noyle has been regarded with suspicion by the resident of Lorenzo District, who were unable to discover exactly how he obtained the money that was always abundant in his purse.

The investigations of an inquisitive sheepherder, who followed him into the mountains one night, shed some light on the subject, and it has been whispered among the settlers that he is a “moonshiner.”

It appears that the daughter was formerly employed at the canning factory at San Jose, and while there, became acquainted with an oily-tongued young fellow name Cole, who won her affections, which greatly annoyed old Noyle, who used to say that there wasn’t a girl in California that could hold a candle to his daughters, and that the best man in the country wasn’t too good a match for either of them.

Yielding to the old man’s entreaties, who urged her to give up the young man if she had a spark of affection for him, Carrie separated from Cole, and for a time her father believed the love affair to be entirely extinguished. A little while since the young man made his appearance at Lorenzo and called upon the Noyle Family.

The old man was sitting in the chimney corner when Cole came in, and noticing by his daughters actions that there was still a glimmering of the old passion remaining, he arose and, with a wicked look in his eye, “fired” the intruder out.
The result was an explosion of wrath generally in that family, and there was no peace in the house for that night. In the morning Carrie, who has been drinking for months past in a manner that even alarmed her father, took a jug of the poison and went out, vowing she would never return. The day was exceedingly sultry, and she sat down on a rock in the burning sun.
The sister, becoming alarmed at her absence, instituted a search, and below the rock found a heap of ashes and the fragment of a dress, together with the jug, which had been emptied of its contents.

Noyle had remained in the house in a state of maudlin unconsciousness. The sister, realizing the dreadful truth, fled to a neighbor’s house for assistance. Then it was that the fact was disclosed that the neighbor had seen a fire in the vicinity of the rock the day before, but thought nothing of it, believing that it was a common wood fire.

The remains were carefully gathered up and interred. An effort was made for some time afterwards to keep the fact a secret, but the father at last “gave it away,” while on one of his protracted sprees.
It is presumed that it was a case of spontaneous combustion. –
San Jose Herald,.

​​
In an additional article from the Santa Cruz Sentinel, dated one week later, Sat, Nov 1, 1879 - An interesting and rather humorous coincidence was noted in the article, as follows.


​- Last week we copied a "spontaneous combustion" article from the San Jose Hearald. The young lady consumed was named Carrie C. Noyle, and in pronouncing the name we would ask if the horrified reader observed any similarity to the words
​"Kerosene oil?"
​The lover from whom she was separated was one "Cole." Of course the dear creature whose true name was Kerosene Oil was separated from coal (Cole). 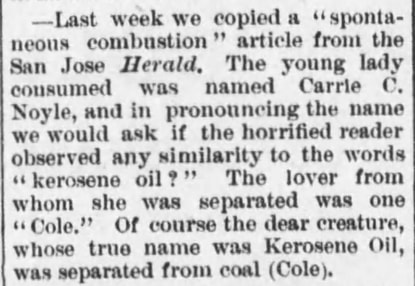