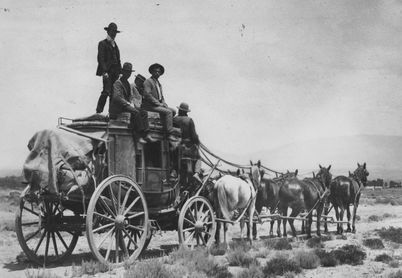 A legendary historic and mysterious enigma of Santa Cruz County is none other than the legends of Charley Parkhurst, also known as “one eyed Charley”.  Charley stood approximately 5 feet tall and weighed about  175 pounds.  His rugged exterior has been described as less than handsome. He was lame in one leg,  his teeth were badly decayed and his face was leathery and sundried, a result of years of heavy smoking and tobacco chewing.  However, one of his most notable features was an unforgettable; cocked eye; a result of being kicked in the face while shoeing a horse, Charley suffered severe injuries which resulted in the loss of one of his eyes - making his appearance noticeably disfigured.

Born in 1812 in the provenance of New Hampshire, Charley was orphaned at birth by his parents, and was raised in a Worcester orphanage for boys and girls. During his teenage years, at the age of 12, Charley ran away from the orphanage and set out on a life adventure that would go down in history for generations to come. Charley would soon find solace within a local rancher by the name of Ebenezer Balch. Balch took a shine to Charley and took him under his wing, adopting him as his own son and teaching him ranch life.  Here is where Charley,  would learn firsthand all that he could about horses and the art of “driving”. Charley quickly learned how to maneuver  both two , then four  and soon he was proficient in maneuvering six-in-hand teams of horses. He became such a good handler that he later went down in history as the “best whip in the northern west”.
​
​While Charley was still young, he soon moved to Providence, Rhode Island - accompanied by his mentor Balch, who had purchased the Franklin House and What Cheer Stables, this is where Charley Parkhurst became known as one of the best stage coachman on the Eastern seaboard, you couldn’t hire a coach, without Charley being requested as the one to drive it.
At approximately 30 years of age, Charley made his way to California’s San Francisco pier via boat, ready to partake in gold fever. He would soon be driving stage coaches through the wildest roaring boom towns of gold country, and ultimately driving dangerous routes between San Jose, San Juan Batista, Mt. Madonna ,Watsonville and Santa Cruz, hauling gold and silver bullion for Wells Fargo stage coaches.

Parkhurst’s reputation exceeded his driving skills, as a fearless  -no nonsense type of driver. Parkhurst was known to pull his shotgun on would be bandits ‘preventing his pay loads from being stolen. Legend has it Charley even loaded a thieving bandit full of buck shot in the dairy air, as he pursued and chased off the would be robber.  Black Bart is also said to have attempted to rob Charley’s payload on the hills of Mt. Madonna, but his attempts were quickly thwarted as Charley’s expertise and courageous demeanor was once again able to avert the notorious bandito and safely deliver his pay load. During Charley’s stage coach deliveries he went down in history as never losing a payload.

Charley often rode stage coach with his best friend of many years Frank Woodward. The pair were described as inseparable and enjoyed many an evening surrounded by an open camp fire, a bottle of whiskey, a game of dice and good conversation. Charley, finally retired  in the Santa Cruz County area. He acquired a ranch and homestead at what is known as the 7 Mile House, in the Watsonville area.  There he made a livery stable for travelers and stage coach drivers, offering fresh horses for further travels.

Charley was known to be financially well off, even acquiring 600 acres of ranch land. His last stage coach run was from Mt. Madonna to San Francisco before  Charley decided to retire in the city of Watsonville, county of Santa Cruz. Charley purchased land and a cabin near 7 mile house and began ranching and lumberjacking; he cast his vote in 1868 in the city of Soquel, for the presidential election of Ulysses S. Grant vs. Horatio Seymour.  It is uncertain who Charley cast his vote for, however Grant won the election 214 to Seymour’s 80.

Parkhurst lived an exciting and eventful live, however the years of stage coach driving, exposure to the elements, tobacco use and rugged life style began to take its toll on Charley, who began suffering from painful rheumatoid arthritis and ultimately developed tongue and throat cancer.

Legend has it that one eyed Charley had a deep secret, one that he tried to divulge, while in a drunken stupor to a neighbor boy in his stable before his health took a turn for the worse. It is also believed that he attempted to divulge his secret to best friend of 20 years Frank Woodward, who stayed by his side, however, that day would seemingly never come as  tongue and throat cancer literally left him “tongue tied” and took over before he could reveal his lifelong secret.

On December 28th of 1879 the legend of Charley Parkhurst, and his secret would seemingly come to an end forevermore with his death in his Watsonville cabin. Or so it was thought.

Charley had succumbed to the deadly cancerous disease, at the age of 67. After his body was discovered the coroner was called to examine the remains, however upon examination they made a shocking discovery. – It would appear that Charley was not a small statured masculine male after all, but a fully developed female – with masculine features.  In fact upon further examination the coroner concluded that Parkhurst at one time in her life, was in fact a mother.  It looks as if Charley’s secret was finally revealed and her legacy would become everlasting after all…

Charley, was in fact Charlotte Darkey Parkhurst – It would appear that while residing at the orphanage for girls and boys in Worcester, all of the children despite their sex had similar haircuts. It was believed that Charlotte simply stole some boys clothing, changed her name to Charley, and walked away from the orphanage to never look back - and for her the rest of her lifetime – she would disguise herself as a man.

Her puzzling and amazing life would go down in history books for generations to come; her story retold by historians and educational facilities - the focus of mystery, amazement and woman’s suffrages for nearly 140 years after her death.
History tells us, her best friend of over 20 years Frank Woodward, was shocked and bewildered by this revelation. He endured a variety of emotions,  not only from the loss of his dear friend, but also anger and betrayal that such a dark secret, was never revealed to him. However, in the end one can only surmise Woodward truly had a sense of pride to have such an amazing friend as Charlotte Parkhurst.

Upon further examination of Charley’s personal belongings, a small red velvet dress, carefully wrapped was found in a wooden chest, one that would snuggly befit an infant. Authorities speculated this dress, may have belonged to a child that Parkhurst had given birth to, a daughter. However, it would never be discovered if the child survived, or perhaps like Charley was given up for adoption.

The mystery of Charlotte Darkey Parkhurst continued, an additional 12 years after her death,  another unexplainable ambiguity arose. One that may explain, why after her demise, her estate was so unusually minuet.
In an article from the Santa Cruz Sentinel dated February 17th of 1891 an unusual discovery was made.

The people near Hihn’s Aptos Mill have a mystery which they are trying to solve. It appears that many years ago Charley Parkhurst had a stable on the banks of San Vicente creek, some two miles from Aptos. After Parkhurst’s death the stable was unused for a long time and was rapidly going to decay until T. D. Sargent concluded to use the stable himself. In one barn Sargent kept his horses and in another his hay. The other day Sargent was surprised on entering the hay barn to find that a hole five feet square had been made in the floor with an ax, and underneath was a hole six feet deep, freshly dug.
It is supposed that Parkhurst had some treasure buried, and the person who knew of its whereabouts succeeded in making away with it As Parkhurst has been dead for so many years the wonder is that the treasure has been buried so long.
Parkhurst is remembered by many of our older residents. He drove a stage between Aptos and Watsonville and other points for a long time. Not until Parkhurst died was it discovered that the stage driver was a woman, who had donned male clothing for some mysterious reason. The driver never talked much of her early life, therefore many of the reasons given for the wearing of male clothing were based on conjecture. It was always supposed that she had treasure buried somewhere, as she was of saving habits, and the smallness of the estate caused some comment at the time it was made known.

The legend of “one eyed Charley”  is indeed an enigma of its time – defying all odds in the wild west of the gold rush era, for a small petite woman, masquerading  as a man,  a ferocious woman who worked one of the most dangerous jobs during its decade and shot off infamous banditos.  Parkhurst would also be recognized as becoming the  first woman known to register to vote in a presidential election , over 50 years before ‘woman’s rights to vote’ became constituted in the 19th amendment in 1920 – he or she would also have been the first ever transgender female to male identity,  to vote in the U.S.

Santa Cruz Ghost Hunters,  hopes that while in the afterlife Charley Parkhurst has found solace in her state of being  - for she was truly an amazing enigma of Santa Cruz County history and a legend of her time.